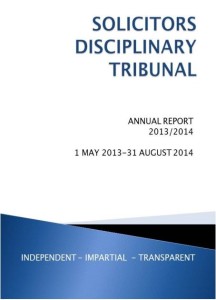 This month saw the publication of the Solicitors Disciplinary Tribunal (SDT) Annual Report 2013 -2014 (the Report), a report which deals with a considerable amount of change at the SDT and which for many will highlight potential changes that could cause concern to those in practice.

Despite reporting a drop in the number of cases prosecuted by the SRA – a factor which is attributed to the long lead-in time for outcomes-focused regulation – the Report, perhaps more significantly,  also highlights a significant increase in the number of Lay Applications; that is to say applications filed by the consumer of the legal service. The SDT view this as, in some ways “a worrying trend in spite of providing evidence of increasing consumer empowerment.”

The Report stresses that an application to the SDT “should rarely be first choice for the consumer if legal consumer complaints procedures are working effectively”.

Often, the Report states, the reason why consumers are taking  proceedings to the SDT is because they do not understand why their complaint has been rejected by other bodies such as the Legal Ombudsman and Solicitors Regulation Authority  – an indication perhaps that there is still much work to be done to inform and educate consumers.  The figures reveal that of 118 applications involving practising solicitors, 12 were made by members of the public with only 2 were certified as showing a case to answer.  Whilst these are hardly huge numbers, nevertheless they are seen as demonstrating a worrying trend – and possibly one which could increase.

A further area of concern that the Report highlights is with the plans by the SRA to increase substantially the SRA’s internal fining powers.  The Clerk to the SDT, Susan Humble, expresses the view that such a move could “realistically result in a perception by the public and legal services providers that the SRA is acting as investigator, prosecutor, jury and sentencing judge in what would be an exercise carried out on the papers without oral hearing.”  Furthermore, since the SDT is also the appeal court for first instance SRA decisions, this could also lead to more appeals to the SDT.

So far as actual numbers of applications, the drop over previous years is actually quite pronounced.  For the 16 months to 31 August 2014 (the period covered by the Report as the SDT moves to a January to December reporting period) there were a total of 134 applications to the SDT.  This compares to 166 for period to 30 April 2013, 239 for 2012, 227 for 2011 and 273 for 2010.  Despite this drop in numbers of cases referred, there has actually been an increase in the number of strikings off.

Thus, looking at the number of cases dealt with by the SDT during the review period, the Report reveals that:

So far as strikings off are concerned the percentage of those dealt with by the SDT in this way has increased.  Thus for the relevant periods, the percentage of striking off orders per total number of applications was:

However, suspensions have dropped from the levels of the previous three years:

The reasons for appearance before the SDT remain fairly consistent over the years with the principal reasons continuing to be failures and breaches.

Register for our Newsletter

Terms and Conditions | Site Map | Privacy and Cookies
Copyright © 2017 Richard Nelson LLP and Murdochs. All rights reserved.
The Lawyers Defence Group is operated by Richard Nelson LLP, a Limited Liability Partnership authorised and regulated by the Solicitors Regulation Authority and whose partnership number is OC357136 and Murdochs Solicitors, who are also authorised and regulated by the Solicitors Regulation Authority, and whose SRA number is 52683.
Please note that all advice, guidance, representation and assistance, legal or otherwise, is provided either by those firms or by appropriate referral to other suitably qualified persons. No advice, guidance, assistance, representation or other support is provided by or in the name of the Lawyers Defence Group.
For further details please refer to the terms and conditions for use of this web site and to the terms and conditions of the firms involved.
The professional rules governing our lawyers can be found at rules.sra.org.uk